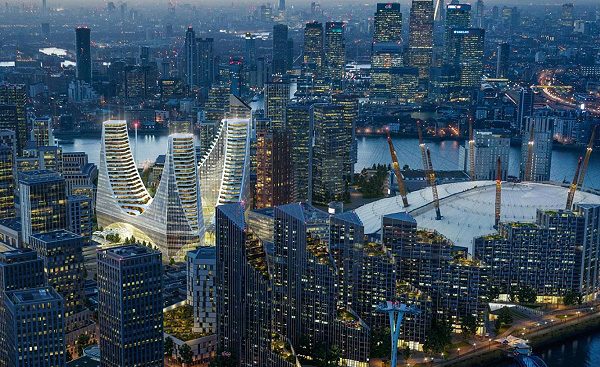 Architectural drawings for a new extravagant £1 billion glass landmark dubbed the “St Pancras of the Underground” have been revealed.

The South East London development, known as Peninsula Place, will be home to 800 apartments, 200 of which will be ‘affordable housing’, along with 80 shops, restaurants, bars, cinema, performance venue, offices and a 500 room hotel.

Processed glass has evolved into a fundamental element of modern architectural building design and already features heavily in London’s skyline.

ESG have seen the demand for processed architectural glass soar over the last few years as designers, developers and architects realise the freedom it brings their designs.

Mr Calatrava said: “It is an honour to be designing such a piece of the fabric of London, a city I love. In designing this scheme, I have been inspired by London’s rich architectural heritage and the very special geography of the Peninsula,” reported The Evening Standard newspaper.

“It will be a project that reflects both this and the ambition of Knight Dragon for Greenwich Peninsula.” He said.

Peninsula Place is already in the third phase of an £8 billion regeneration scheme stretching 150 acres on the south bank opposite Canary Wharf.

When complete the design will be “unashamedly modern” says Richard Margree, chief executive of Knight Dragon, with passengers arriving at the “the single most astonishing Tube station in the UK.”